Richard Heart, the founder of the cryptocurrency HEX has developed an initiative whereby donators to the SENS Research Foundation (SRF) receive the pulse cryptocurrency in return. According to Aubrey de Grey, the Chief Science Officer and Co-founder of the SENS Research Foundation said his organization’s research focuses on “not just slowing down the accumulation of damage that happens to the body over time and eventually kills it, but to actually begin repairing that damage”.

The scheme developed by cryptocurrency developer Mr. Heart involves a revolutionary intersection between the worlds of cryptocurrency and science where donators to the SENS Foundation via pulsechain receive an amount of a new cryptocurrency in return.

The new cryptocurrency is called pulse, and the amount received will be proportional to the size of the donation received.

So far the scheme has raised a staggering $25million in just four days for the anti-aging charity, a benchmark that Doctor de Grey has described as “mind-blowing”.

Doctor de Grey added: “We have already received between $20 and $25million over the past three or four days. Our annual budget has been four or five million dollars. This is something that is completely transformative. It is going to allow us to move considerably faster to getting towards a post-aging world, it is just amazing!”

Aubrey de Grey added: “We have been having a very good year with income, a big expansion of our activities is coming. Thanks to the PulseChain Airdrop, those plans are going to explode into another level entirely.” 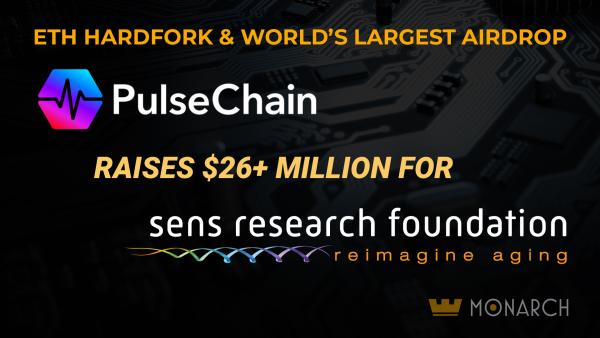 Pulsechain will be a fork of the Ethereum blockchain and will have identical historical data but the pulsechain tangent will operate on the energy-efficient proof of stake consensus mechanism.

Mr. Heart also informed that transaction fees using pulsechain will be a fraction of those applied on the ethereum network. However, Aubrey de Grey stated that this has been met with positivity by Vitalik Buterin, the founder of ethereum.

Aubrey de Grey said that “it was suggested to me that this would not be to the liking of Vitalik Buterin who created ethereum and who has donated very extensively to the SENS research foundation.

“However, I want to reassure everyone that Vitalik has expressed directly to me his strong support for this and has said that this whole thing has greatly improved his opinion of Richard Heart.”

This article is firstly and originally appeared on Pulsechain.com and redistributed by Grabcoins.link.

BitMEX to Airdrop and Launch its Native Token BMEX